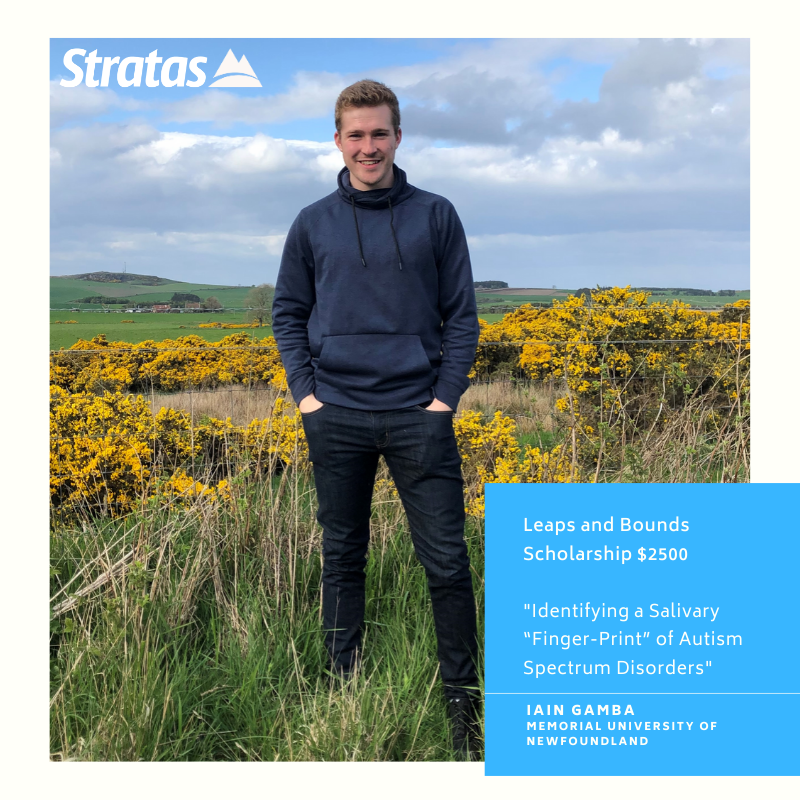 Stratas is proud to announce the winner of the Leaps and Bounds Scholarship ($2,500), graduate student Iain Gamba of the Neuroscience Department at the Memorial University of Newfoundland. This award, which is exclusive to Canadian students or researchers studying autism and mental health, was made possible by the generous financial support of Leaps and Bounds, an Ontario-based provider of therapies for special needs children and support for their families. ⠀⠀⠀⠀⠀⠀⠀⠀⠀⠀⠀⠀⠀⠀⠀⠀⠀⠀⠀⠀⠀⠀⠀⠀⠀⠀⠀⠀⠀⠀⠀⠀⠀⠀⠀⠀
Iain’s research project will identify the microbiome markers in males and females with autism spectrum disorder (ASD) via saliva samples and will compare them to general population controls within their sex group. This project specifically looks at sex differences in children with ASD and how their microbiomes (or, salivary “fingerprints”) differ from those of the general population and how sexual development contributes to differences in ASD prevalence. Iain’s research will test whether testosterone and other sex hormones in saliva samples are associated with ASD. This is especially important given that recent research has highlighted the role these hormones might play in determining social behaviour and microbiome composition. The study will be conducted over 3 months and will test a total of 80 participants aged 6-10 years. ⠀⠀⠀⠀⠀⠀⠀⠀⠀⠀⠀⠀⠀⠀⠀⠀⠀⠀⠀⠀⠀⠀⠀⠀⠀⠀⠀⠀⠀⠀⠀⠀⠀⠀⠀⠀
In Newfoundland and Labrador, where Iain is conducting his research, 1 in 57 children are diagnosed with ASD, which is significantly higher than the national average and presents serious medical and economic challenges for the province. Iain’s project hopes to uncover new biological markers in individuals with ASD, provide a deeper understanding of how the microbiome and endocrine systems interact in a sex-specific manner in those with ASD, and will hopefully lead to more targeted, non-invasive diagnosis method of ASD in the future as well as a better understanding of ASD more generally.

Thank you! Your submission has been received!
Oops! Something went wrong while submitting the form.